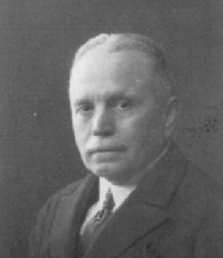 Demetrios Eginitis (22 July 1862 - 13 March 1934) Demetrios Eginitis was born in Athens and graduated from the famous Varvakeio School of Athens in 1879. In the same year, he began his studies in the Faculty of Physics and Mathematics in the Philosophical School at the University of Athens. He graduated in 1886 with a Doctor of Philosophy degree in mathematics (Stefanides, 1948). The Athens University’s Council for post-doctoral studies awarded him a scholarship so that he could take astronomy and mathematics classes at the Sorbonne in Paris. The following year, on 1 November 1887, he was accepted as an apprentice astronomer (élève astronome) at the meteorological observatory of Montsouris and, somewhat later, at the Paris Observatory, where he finally became a staff astronomer, in 1889. When in France, Eginitis also worked at the Laboratory for Stellar Spectra in Salet, at the Physics Laboratory of Cornu, at the meteorological centre of Parc Saint Maur and at the Meudon Observatory. In addition, he worked outside Paris for a while, at the Observatory of Nice, and even outside of France, in Lockyer’s astronomical laboratory in England. At the Paris Observatory, Eginitis worked diligently for two years with the meridian circle carrying out regular equatorial observations (i.e. measurements of the culmination of stars for mapping of the northern skies and determinations of the proper motion). He also observed asteroids and variable stars with the meridian telescope located in the western dome. Eginitis became known for his classic treatise Sur la Stabilité du Système Solaire (On the Stability of the Solar System), in which he studied the secular variations (anomalies) of the semi-major axes of the planetary orbits. He submitted this in 1889 to the Paris Academy, where it was presented by Rear-Admiral Mouchez (the Director of Paris Observatory). In the same year, his treatise on celestial mechanics was published in the Annales de l’Observatoire de Paris, where for the first time Eginitis is referred to as a staff astronomer (astronome); this was an important career step for such a young man. ... ... http://www.narit.or.th/en/files/2007JAHHvol10/2007JAHH...10..123T.pdf
(Show less)