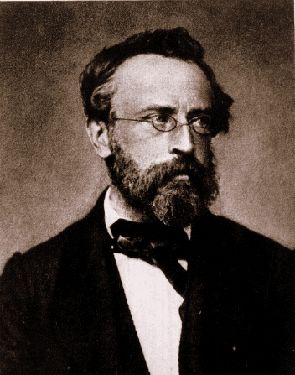 Bruno Hildebrand (1812–1878), economist and one of the founders of the German historical school, was born in Naumburg (Thuringia), the son of a civil servant. He entered the University of Leipzig as a student of theology but soon shifted to history. He very early joined the liberal-nationalist student movement, and since this affiliation made him the object of police attention, he fied to Breslau to escape harassment; however, he was imprisoned there before being allowed to continue his studies. In 1836 the University of Breslau awarded him his doctorate and shortly afterward the rights of Dozent. In 1839 he was promoted to acting professor of history. But Hildebrand’s restless and intensely political nature found the scope of historical study too confining; increasingly his interests and his lectures focused on political philosophy and economics.

The most productive decade of Hildebrand’s academic career began with his appointment, in 1841, to the chair of Staatswissenschaften (government) at the University of Marburg. Here, once again, he clashed with the authorities, especially when as university rector he championed the liberties of students and staff; in 1845 he was relieved of his administrative position, and in 1846 he was charged with lese-majeste and dismissed from his teaching post. Hildebrand was eventually acquitted, but he was not reinstated in his professorship until the 1848 revolution had swept a liberal government into office.

Hildebrand was elected deputy of the Frankfurt National Assembly, where he distinguished himself as an uncompromising protagonist of constitutional government and as an indefatigable member of the parliamentary commission on economic and social affairs. With the triumph of absolutism, however, his cause was doomed. The Diet was abolished, and Hildebrand, as one of the outspoken liberals, was charged with high treason and forced to flee into Switzerland where, in 1851, he was appointed to a chair at the University of Zurich. Hildebrand spent five years in Zurich, active not only as a professor but also as a company director promoting and building a railway. He then moved to the University of Bern and helped establish the first Swiss statistical office at Bern.

In 1861 Hildebrand accepted an invitation extended by the University of Jena and returned to his native Thuringia. In 1863 he started the Jahr-bücher für Nationalökonomie und Statistik. In the following year he was instrumental in founding the statistical office of the Thuringian states. As its first director, he planned the work of the new bureau in such a way as to link it closely with the research and teaching activities of the university program in economics.

Although Hildebrand was neither a fluent nor an exciting lecturer, good students found him an inspiring teacher, and some of the better economists of the German historical school were products of his “Jena seminar.” Because of this impact, Hildebrand’s position in the history of German economic thought cannot be assessed in terms of his writings alone.

One of Hildebrand’s earliest works, Die National ökonomie der Gegenwart und Zukunft (1848), is also his most important; it is clearly the work of a youthful homme engagé. The first chapter is devoted to an evaluation of Adam Smith. Acknowledging the greatness of the Scotsman’s contribution, Hildebrand proceeded to criticize the philosophy of natural law and the instinct of self-interest underlying Smith’s reasoning. Hildebrand denied the universality that Smith claimed for his theory and asserted that Smith’s basic assumptions were ahistorical; inasmuch as they derived from the English scene, they were irrelevant to an understanding of the problems in other eras and other lands. Above all, Hildebrand felt that the premises did not fit the peculiarities of German conditions.

Hildebrand admitted that his view of classical economics had been influenced by Adam Müller. Yet he added that he could accept neither the feudal and medieval notions of the German romantic school nor its reactionary conclusions. Even Friedrich List, though allowed some credit for his insights and for his contributions to the important public debate on international trade policy, was given short shrift by Hildebrand.

Significantly, Hildebrand devoted the largest part of Die Nationalökonomie der Gegenwart und Zukunft to a review of socialist literature, in particular to an examination of the recently published Condition of the Working Class in England by the then unknown Friedrich Engels. He saw the socialist writers as “up-to-date,” with a historical perspective and above all a focus on the predicament of the proletariat in industrial society. At the same time, Hildebrand rejected all socialist values, warning that the socialist society would be the “grave of individualism and civilization,” and his stage theory of economic progress was surely intended as a polemic against Marxist socialism. According to Arthur Sommer, Hildebrand’s vision of society as advancing from barter to monetary exchange before reaching its highest synthesis in a credit economy was meant as an anticommunist manifesto. In this scheme the fully developed credit economy would give the propertyless wage earner access to capital and thereby resolve one of modern society’s most pressing problems without recourse to socialism.

In the last 15 years of his life, Hildebrand turned away from theoretical issues and concentrated on directing statistical studies bearing upon important social problems. He thus anticipated the program of the Verein für Sozialpolitik, which he joined as a charter member in 1873. (He was the only one of the founders of the German historical school to do so.)

Hildebrand failed to develop a coherent system of economics. The source of his failure lies (see Eisermann 1956) in his petty bourgeois parochialism, with all its fears and prejudices regarding the rapidly industrializing world. This was the cause of his fuzzy thinking and of his pathetic efforts to reconcile basically irreconcilable points of view. Fighting, as it were, a two-front battle against the feudal aristocracy on the one hand and the emerging proletariat on the other—while simultaneously concerned about the precariousness of its own economic status—the German middle class was doomed to political impotence. Its intellectual leaders, including Hildebrand, reacted to their conflict by abandoning clarification of the social process in favor of politically innocuous empirical research and social engineering.